Dogs “Co-evolved” to Live with Humans 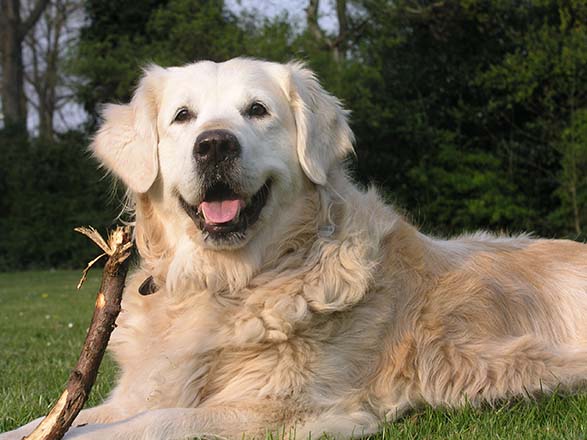 Last week when we talked about the loyalty of dogs I suggested I would talk this week about some of the evidence that dogs “co-evolved” to live with humans.

Q. When did dogs first become domesticated?
Like all pre-history, there are no records so nothing is precise, and we always have conflicting theories and arguments. The earliest doglike skull suggests 33,000 years ago in Siberia, but genetic evidence from China hints around 16,000 years at most. Nearly everyone agrees dogs were co-living with humans by 10,000 years ago.

Q. Did dogs come from wolves?
Possibly not, although that’s what is most often cited. Wolves are certainly their closest living relatives, but the ancestor of dogs is probably an extinct wolf-like canid. Some research published in 2014 found evidence that wolves and dogs diverged about 11,000 to 16,000 years ago, and then both populations suffered pretty severe genetic bottlenecks.

Q. What is some of the evidence that we started living together and then evolving together?
A team at the Chinese Academy of Sciences looked at genes in dogs and humans and found similar changes in both to do with digestion and metabolism. This follows research published in Nature identifying genetic changes to support increased starch digestion. It is postulated these changes could be to do with the dogs gaining access to carbohydrate rich human foods, and a more plant based diet. The amylase gene AMY2B is the one critical to domestication in response to dietary starch.

Q. Is that AMY2B gene present in all dogs?
The researchers found that some breeds, including the Dingo and the Husky, lack the AMY2B expansion. This can perhaps be explained by the diets of humans in the areas these dogs developed, as neither the inuits or the Australian aboriginal population had agriculture and therefore a ready diet of starch.

Q. What about behaviour?
A great experiment showed the ability of dogs to perceive human commands, in particular pointing. Human infants pick up on pointing well before learning to interpret words. It can take only a few minutes to teach a dog where a treat is hidden by pointing and dogs are equivalent to a two year old child in this regard. However the researchers showed that chimpanzees, our closest relatives, just didn’t get it and couldn’t understand what pointing meant. Wolves do badly with the pointing gesture too. It was postulated that this is evidence that, even genetically, dogs are programmed to pay attention to humans.

Q. What about human behaviour?
Dogs and wolves mark their territory with urine. From the earliest times, humans have marked their territory with hand stencils and prints, grooves in rock, and rock art. There are schools of thought that we developed this because we observed what dogs did but couldn’t rely on our sense of smell.

Q. What about dogs interpreting human behaviour?
Dogs can discriminate human emotions from our facial expressions. Dogs were trained to recognise happy versus angry human faces in pictures, and then were probed by using just half of those faces, or entirely new faces. The dogs performed significantly above chance, but also performed much better when “happy faces” were rewarded and learned the discrimination more quickly than dogs for which the “angry faces” were rewarded. Therefore, if we want dogs to learn quicker, best we put on our happy face!